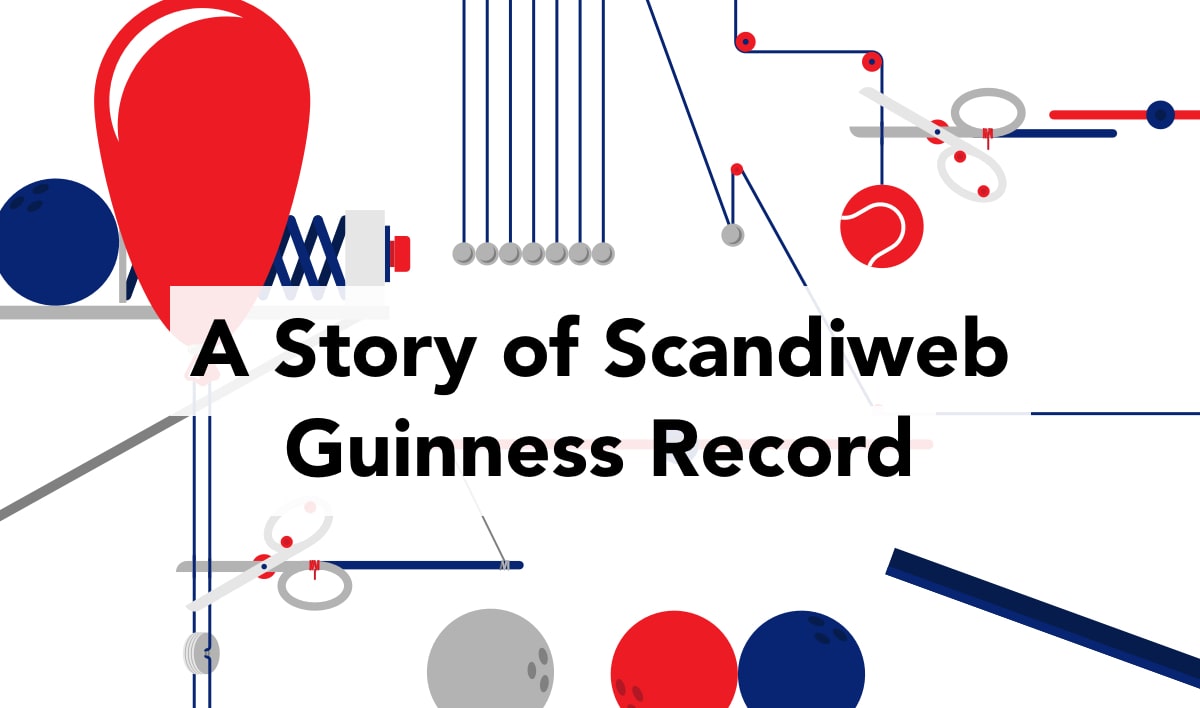 I was sitting in office center cafe thinking about the ad copy for our next event. Last year we built a chain reaction of some 25 large segments that triggered a band to start performance and this year we wanted to open-source it and invite anybody looking to create great stuff and mix with IT crowd of Scandiweb.

I was wondering what copy would attract more people… If we throw a party with a known band afterwards, if we use some unusual objects or if we double the size of it? What if we make 50 elements or 100?

And what if … we make it largest in the World?

For few seconds it was like you see the globe from the side and want to set a new mark on it. To expand the limits of currently possible.

It felt like … fun. And something to fight for. I checked Guinness record listings and figured out that there is a long history for such record and, well, we can apply for it! We can get Guinness Records representative to fly over to verify it and we can potentially… WIN!

I would not go ahead unless I had a team, who supported the idea of reaching this goal. A team, who has a culture of delivering seemingly impossible things.

After few “Thank you, but no”, Scandiweb Record Manager was found and turned out to be Vjaceslavs Kreidikovs, the man, who helped us to grow from 70 people to 100 and also helped to survive to few of our startups.

Yeah, we wanted publicity! We wanted to share the joy of setting the record with local crowd, engineers, tech students and whoever felt passionate for it! We got in touch with PR agency NewBlack headed by Arturs Mednis and they helped to elevate the idea from a “chain-reaction” to the “great-event”.

They suggested to assign a meaning to the reaction result and light up official City Christmas Tree. To place the chain-reaction in the City Council building and one of the largest City squares and involve City Major in pressing the button and triggering the chain.

Vjaceslavs did not seem to feel any easier after the goal and responsibility became even more ambitious! Not only to fight for the Record, but also do it in front of thousands people from yoru city expecting Christmas tree lights to turn on!

Naturally, city major was busy with other things, so our suggestion of cooperation was received, but we did not hear the answer for about a month, Christmas was kind of approaching, and, we naturally, got some other things to care about… so, we thought that maybe we postpone…

Until a day, when I was walking with a stroller and got message from the PR agency “City Major said Yes!”

It is just a bit of luck… No preparation is necessary!

Promo page was launched in few weeks, we got good coverage and scheduled weekend meet-ups with our team and volunteers in two large hangars. Some people were bringing objects to be part of the chain reactions, another were screwing, gluing and making things work, other teams were testing.

Previous record was planned for about a year, we had less than 3 months now. But, if major told “yes”, we had to make it!

It is a project involving up to 300 people, almost 10,000 individual pieces in several locations with the aim to make them all work together in a consistent manner. We would not do it unless we were backed up by our skill in bringing complex software projects to life. We set up JIRA project, created workflow that involved purchase, design, QA, transportation, and installation phases, inventory of elements, description of triggers along with photos and schemes of the steps in the chin reaction. First it was all planned on a paper, with rough schemes and drawings, in order to have 400 UNIQUE steps

Then, whenever we had a stand ready, whole documentation was ready.

All stands were created as tasks, with exact workflow, so we know where we are with project delivery, what are the impediments, and where stand was stuck and why.

Counting and describing all the items/flows in the stand

Each stand has it’s complete description and flow of what needs to be done/tested/fixed in JIRA (as most common tool for us, as an IT company)

For Vjaceslavs these were most stressful days and nights in his life, but every week we had a demo that showed that we are few steps closer to the launch date.

Countdown. 48 hours to the record attempt

All objects were transported to the event place, City Council building was stuffed with chain reaction elements on 3 floors and entire lobby.

Things did not work. We also had to turn off large fountain in the lobby as resulting humidity impacted dimensions of wooden elements of chain reaction making their performance unpredictable.

Scandiweb team was excited and energised. Sound and light team was mounting the stage and screens to showcase what is happening in the building as the chain reaction was 80% in the City Council Hall and only some largest 60 steps were outside on the square.

Like in a usual project there are many unplanned things you have to take care like police surveillance, fencing from the crowd, positioning of the stage, being on site as early as 6am to participate in morning news, and… some hundred things more!

Countdown. 6 hours to the record and … it does not work.

Guinness World Record officials give you 3 official attempts to set the record. If you fail all of them — you are welcome to apply and try again after some time. Official City Christmas Tree lighting up was planned at 6pm and our first unofficial attempt was scheduled in the morning.

Our efforts to prepare did not work out completely. We had to push things with our fingers to make the chain-reaction-work. We identified some bugs and were fixing them, adding more details that would bring robustness to the interactions.

*That is so powerful feeling, when you see thousands of small pieces working together and then… in the last segment… it just got stuck. GOT STUCK! #@##$!!! AND FAILED THE ENTIRE CHAIN!**

It was such a stress for the team cause they had to make sure that every small piece of this monster that spanned some 200 meters, if would put in one line will work exactly as envisioned! And a single small failure like a piece of air baloon popping out can fail entire project.

We scheduled the first official attempt at around 1pm and we gloriously failed it! Well, actually in 3 places. We were pretty sad, but team decided to try again in one hour.

Important note! It takes considerable amount of time to put all the elements back — to load the chain reaction, to put the triggers in their starting position and adjust everything again.

After a while we cancelled 2nd attempt because, hey, we are developers! We are not “trying” to launch the site another time, if we failed.
We look for problems and we fix them! So, it was decided to start testing again in smaller pieces and then larger components and do not do any official attempts until we can finish entire chain at least 2 times in a row!

And we never did it! There always were some new things failing. And also natural wear-and-tear started to play their role…

In the end, we scheduled 2nd attempt right together with the Big Show. Initially, we hoped we make the record and then will do the show on the chill as anyway Guinness Record is there, but… it was all scheduled to happen in the same time, 6pm. Official attempt and thousands of people standing on the square waiting for the City Christmas Tree to light up!

Things still did not work out well, so I had to remove an entire component of some 20 steps because it was too risky to keep it. So, in the last moment, we had to connect neighbouring blocks from scratch to isolate the risky piece.

Finally, I was standing on the stage pushing the button with City Major and … MAGIC … it worked. For the very first time ALL SMALL PIECES functioned as one team and made it! Guinness Adjudicator and her assistants were following up every step and they confirmed — WE GOT THE RECORD!

I shouted and screamed so much that lost my voice for a week. And as promised in one of the interviews ran through the City Hall swimming pool, so when I went on the stage with the teams to get the diploma — the jeans were soaking wet 🙂

Here is the video trying to capture our emotions!

For our team it was a joyful Project Delivery Exam. I believe we could not make it unless we had years of common history in Scandiweb. For me the record and how we did it — is manifestation of Scandiweb values. We dream big and aim high. And once committed — WE DELIVER! And then have a party!

There is next challenge being planned — stay tuned!

What if we told you it’s possible to get hands-on experience with PWA without investing your time and resources? It was on Dec at Scandiweb!

Read about the “eggsercise” given to project managers that should encourage them to think outside of the box.

This episode is not only about 5 capable Scandiweb’s developers, but all of them also happen to go by the name of Edgars.