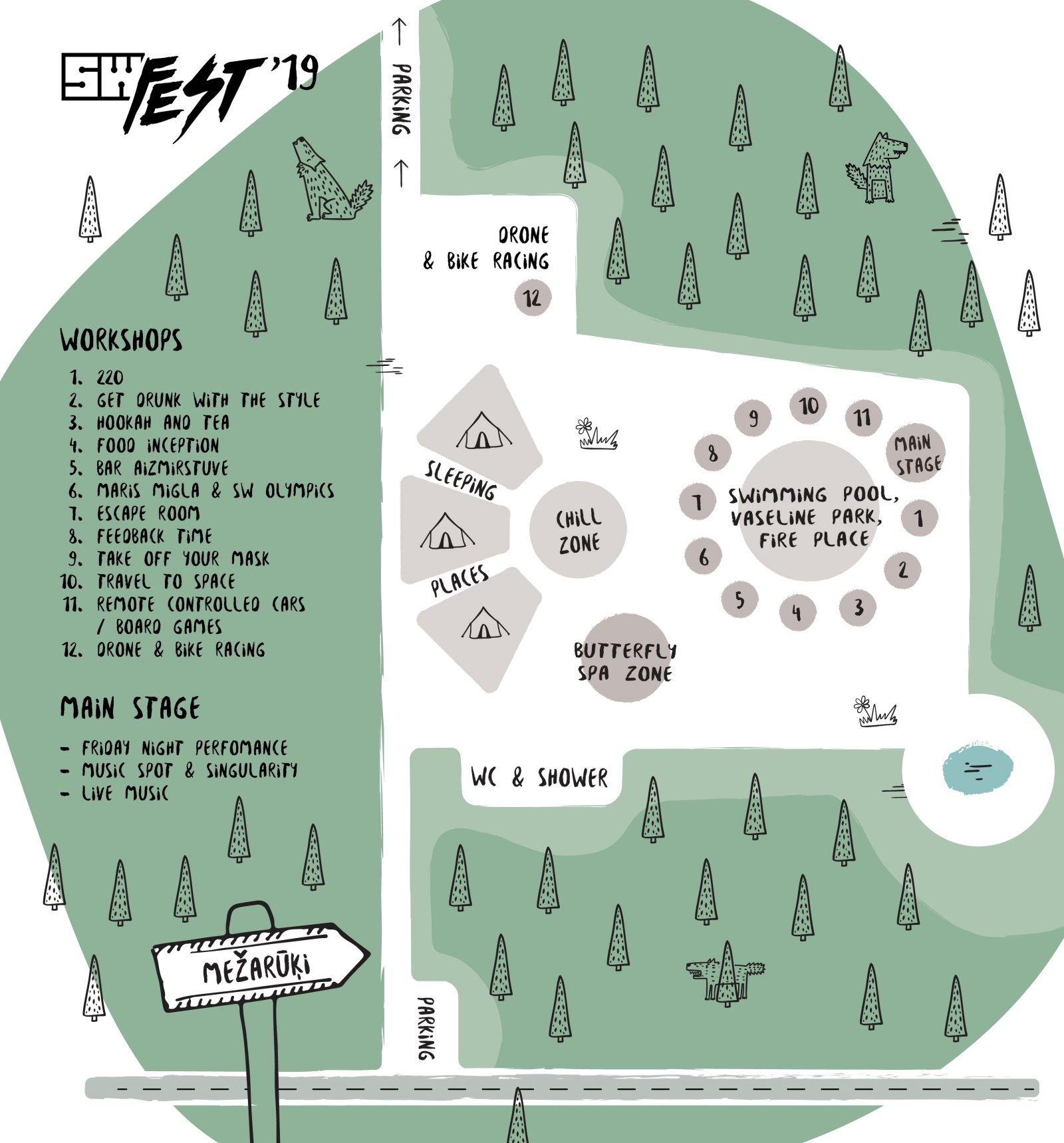 The annual summer gathering of epic proportions – ScandiFest – is the epitome of our long-lasting ‘work hard-party harder’ mindset. This year was no exception. Only this summer we decided to take matters into our hands by coming up with our own workshop ideas and making them a reality. ScandiFest’19 was going to be crowdsourced – us ourselves being that crowd.

A complete freedom of expression

Imagine that any, even the utmost crazy and wild festival idea of yours could come to life – what would it be? What kind of creative activity would you want your peers to experience? This was the setup we had to go by this summer. 150+ Scandiwebians and their plus ones gathered in deep woods of Latvia to experience a festival made of a variety of crazy activities organized by their own colleagues under the collective theme of ‘Metamorphosis’.

Yes, you’re not mistaken. The format change meant that instead of the usual professionally arranged and prepared concrete activity plan, Scandiweb employees were ScandiFest organizers in 2019. Everyone that wanted to challenge themselves and become festival organizers were welcome to split into groups with like-minded people and come up with any workshop that they want to make as an activity for the festival.

The ones that were brave enough to take their idea to the next level and actually make it happen had a complete creative freedom. From cocktails to dumplings, XXL jenga to bracelet making, from spa to vaseline park, chess to dirtbikes, to space travel. Anything was possible.

The only rule was each workshop had to be based on 3 simple, yet significant principles:

So, in short, the workshop could be anything imaginable that falls under these three principles, and all the resources were provided. The company was in charge of taking care of financial expenses, precisely calculated on a spreadsheet beforehand, workshop creators were in charge of coming up with and leading the team-building and productive activities, and every other member of the team was simply in charge of participating and making the most out of the time spent at the festival. Sounds great, huh? It sure was.

As mentioned already, this year we were aiming to discover the creators within ourselves, making the organizing of ScandiFest a type of internal crowdsourcing for ideas. Employees and festival goers themselves being that crowd. Crowdsourcing in its core is taking a project and building it around motivated individuals, giving them all the support they might need, and having a complete trust that they will get the job done. And we didn’t have a single doubt in our team.

For Scandiweb it was also a way of tying all the departments together, and encouraging collaboration among many different personalities we have working here. HRs, PMs and creatives were still hustling nonstop making sure everything is intact, but this year all the other departments were getting actively involved in planning, too. And you could tell, the collective excitement and party mood was growing day by day, as the festival was approaching.

With this being a crowd-sourced event, it was important to keep in mind that just partying and not contributing to the greater good that is an amazing festival for everybody, would bring down the overall spirits a bit. Not organizing a workshop would also mean not being eligible to win 5k euros.

Yes, about that. Each participant was given 3 tokens of gratitude to give out to any of the workshops. When it came down to feedback time, everyone voted for the most interesting and inspiring workshops that they had experienced while being there. The stakes were high, as the winner of the vote was getting a check for 5k euros to split amongst the workshop team members.

There were a lot to choose from. A lot lot. In the end 15 very different workshops were made and saw the light of day at ScandiFest. You could challenge a chess master, drive a remote control car or catch adrenaline on a life-size dirt bike (with a chance to win it and take home later), make bubble bracelets, check out the outer space through VR glasses, test your cooking skills by preparing dumplings from scratch, while enjoying unlimited hookah and tea in-between. It’s starting to get tiring to type, but there’s more.

Our CEOs were doing the ice bucket challenge, taking pies in the face, singing the Titanic soundtrack, getting written on – all for a great cause, with a total of EUR 1500 donated to charity. Not only that. On this years ScandiFest there were watercolor drawing lessons, escape room, acting exercises, board games and courses in delicious cocktail making. Butterfly spa earned a special recognition as the workshop to forget all the troubles in and experience quite an unusual and colorful spa ritual. And more! Who wouldn’t want to participate in all that craziness?

The main prize was taken home by the 4-person workshop that thought of a simple, yet brilliant idea, and made sure none of the festival participants were hungry. Aromatic vapor streams from barbecuing shashlik were drifting upwards over the tent of workshop team ‘Maris Miglā’ all ScandiFest long. Hotdogs and burgers, meats and veggies to satisfy all the food cravings festival goers might have. They were on it night and day since arriving, promoting care for colleagues, that didn’t get left unnoticed.

All in all ScandiFest’19 and the test-run of the new event format by crowdsourcing internally turned out to be a success and a pleasure, with a bunch of superb memories with colleagues to cherish. Till next year!

If the party don’t stop, we invite you to follow us down the memory lane two years prior, and enjoy the previous ScandiFests, years ’17 and ’18 in their full glory.