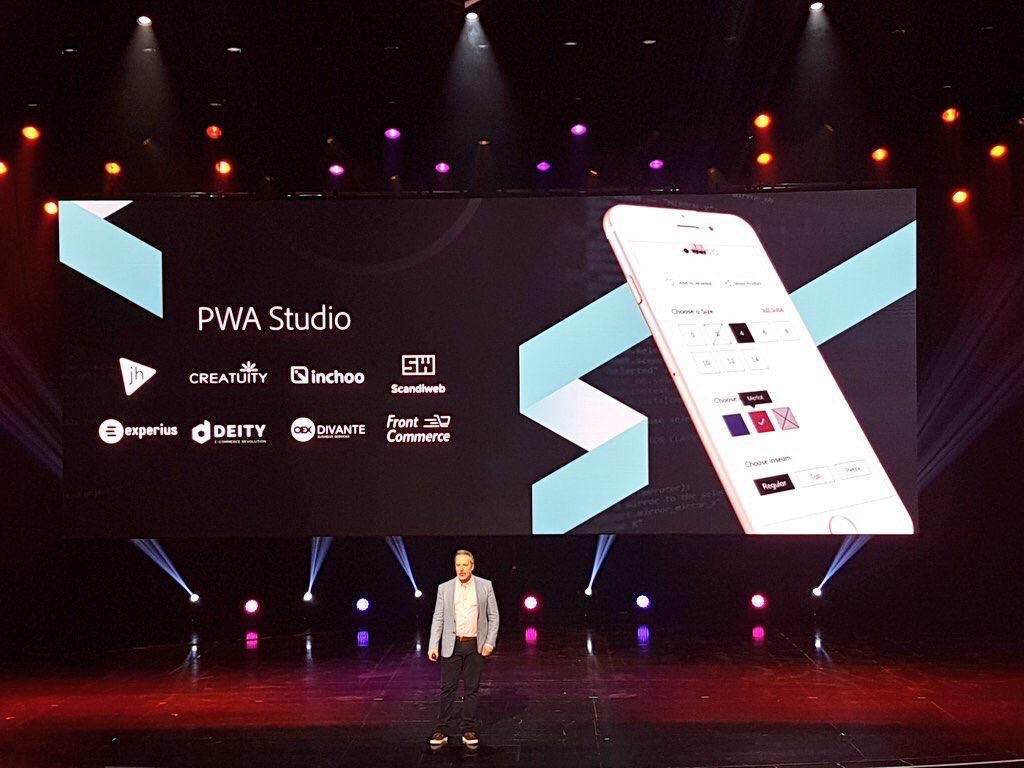 Last year’s Magento Imagine was a blast. Our innovative VR shopping experience almost bagged us the Imagine Excellence Award, we participated in a lot of insightful discussions both on-stage and off-stage, and we met tons of incredible people.

This year Scandiweb took it to a completely new level.

But first, a little context. Magento Imagine is a must-attend eCommerce conference hosted by Magento themselves that gathers merchants, agencies, and technology providers from all over the world, boasting 3000+ attendees from 50+ countries. Magento news, developments, and ambitions are announced, community contributors are celebrated, and innovations are recognized. You can find the crème de la crème of the Magento community at Imagine.

This year, the topic of Progressive Web Applications basqued in everyone’s undivided attention. If you’re unaware of this game-changing technology, then you can read all about it here. But for the time being what you have to understand is this – think of PWAs as cool websites with the features of an app: blazingly fast loading speeds, incredible mobile UX, App store compatible, SEO friendly, among many, many other benefits.

It comes as no surprise that promises to revolutionize eCommerce technology has Magento and every merchant across the globe fired up about PWAs. However, the hype is guarded due to a lack of a standardized theme. In other words, everyone’s excited about PWA, development on PWA solutions is going full-steam ahead, but there’s still no single tangible solution for merchants to confidently adopt.

And it’s not just merchants. PWA affects the whole Magento ecosystem. Extension developers are anxious to see where this leaves their products; technology partners are scrambling to make sense of everything about PWA. It’s perfectly understandable – until there’s something solid and concrete to rally around, people’s excitement will remain cautious and related development – slow.

In fact, one of the demo stores Magento decided to show off on stage encountered some disenchanting issues, further solidifying the feeling that this technology is not quite here yet. What was a lost chance for Magento & featured PWA solutions, turned out to be a great opportunity for ScandiPWA.

It was an absolute pleasure to see our hard work appreciated and recognized at Imagine 2019, as ScandiPWA featured in almost every PWA related discussion throughout the conference. Our stand was perpetually swarmed by people seeking demonstrations and information about the theme, and people were stunned by our demo store. 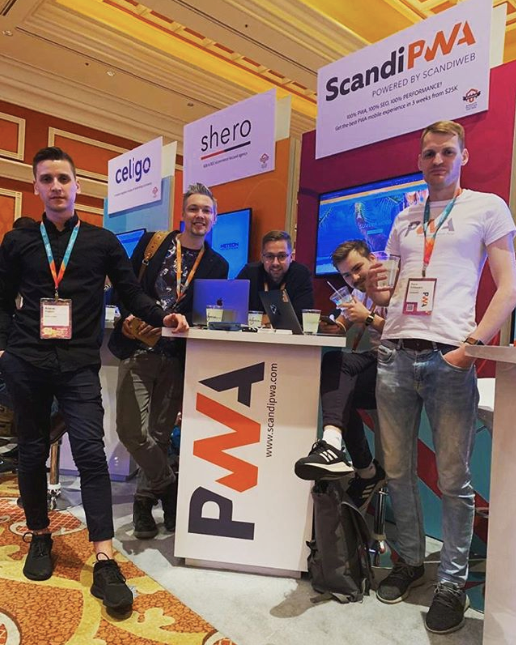 It was just that, our demo store, that allowed ScandiPWA to shine bright among the brightest Magento stars. It’s a functional Magento PWA store that exemplifies the best of what PWA offers, with incredible speed, UX, and more. Furthermore, it echoes Magento’s open source philosophy, and is already being implemented for real clients, so people were excited to see one of the most eye-catching implementations of PWA in action and they were not disappointed.

Ultimately the promise of PWA amounts to truly seamless experience and it’s what was offered by ScandiPWA. With “Scan & Enjoy” business cards that bore a QR code, people were easily funneled to the demo store, which, in fact, had received a mobile-optimized redesign that was launched live right there at the Magento Imagine conference! 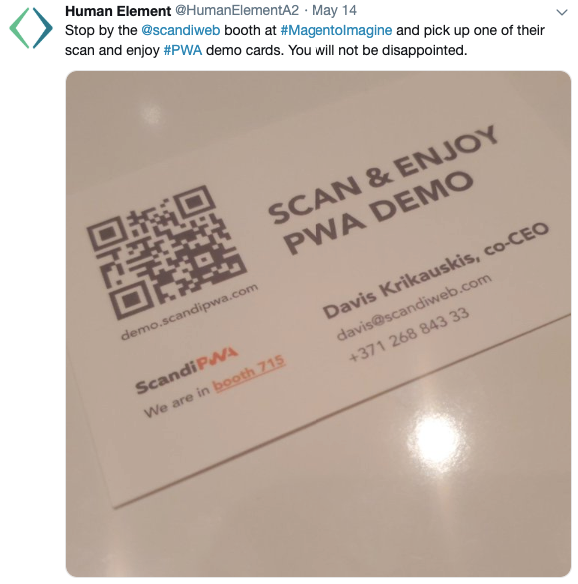 With several hundred(!) Magento enthusiasts signing up to discuss and hear more about ScandiPWA, our team can safely claim to have had one of the most popular stands at Imagine, which speaks volumes about the interest in PWAs and the quality of our product, bringing a wide smile to our faces, knowing that ScandiPWA is sure-footedly heading in the right direction.

Collaborating with Google and Magento

But the good news don’t stop there! During the conference, we had 3 meetings with Google’s PWA team and we’re excited to announce they will be supporting the ScandiPWA project! Curious to see ScandiPWA in action, Google is looking forward to publishing some eCommerce case studies on some of the real life projects ScandiPWA has in the works, as well as has offered to review said implementations for optimization opportunities, collaborating to ensure ScandiPWA performs at its maximum level.

PWA appeared on our radar over three years ago and ScandiPWA has been in active development for almost a year now. Hearing Ben Marks praise the technology and philosophy behind it back in March and merchants and developers having such an explosive interest in it at Imagine validates a lot of the work that has been done, and ScandiPWA promises to continue development at the highest standards, while collaborating with Magento merchants from all across the globe to ensure the best PWA experience.

ScandiPWA is an in-house project of Scandiweb – a full-stack Magento agency that can boast one of the largest certified Magento developer teams in the world. It was encouraging to see that not only did the innovative ScandiPWA team get a lot of time in the limelight, but also Scandiweb as a whole got some positive mentions, being listed among the most certified agencies, as well as working with 33% of the commerce partners of the year. 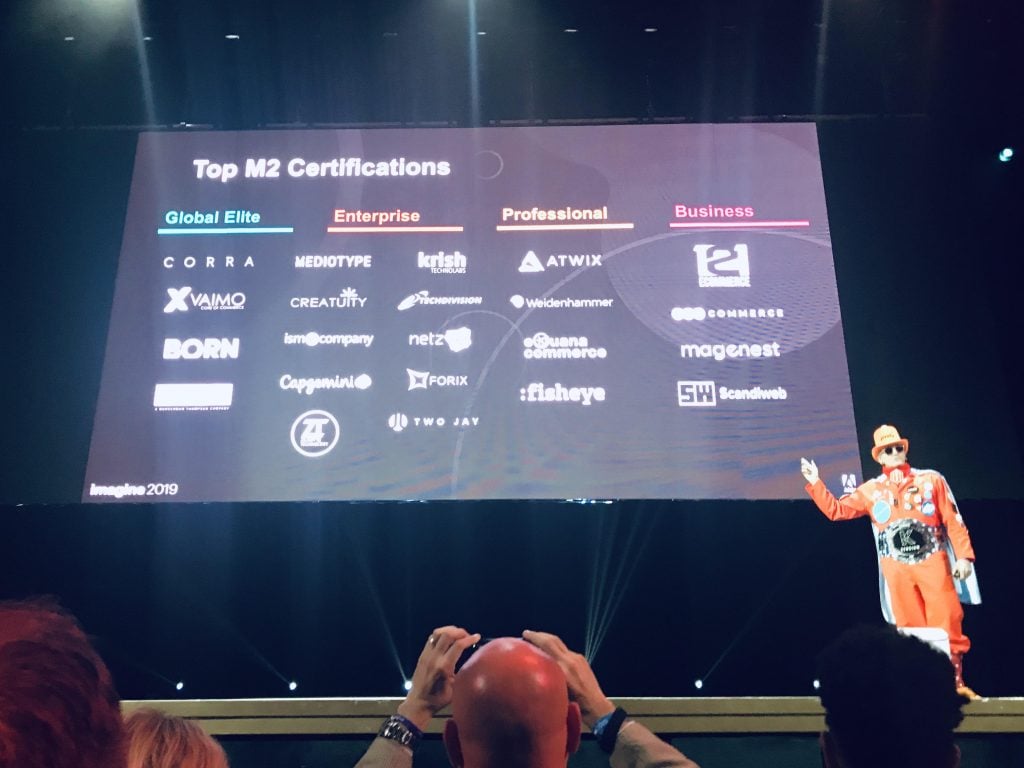 On top of all this, we managed to attend quite a few sessions, meet our past, present, and future clients, have a great time and enjoy Las Vegas to the fullest. A sincere thank you goes out to Magento for such a memorable event in such an epic venue!

Visit scandipwa.com to learn more about the best Magento PWA solution out there and get a free estimate. Don’t forget to check out the demo store! Find all the essential information on PWA: features, explanation of the tech, real-life case studies, and much, much more. Take a look!